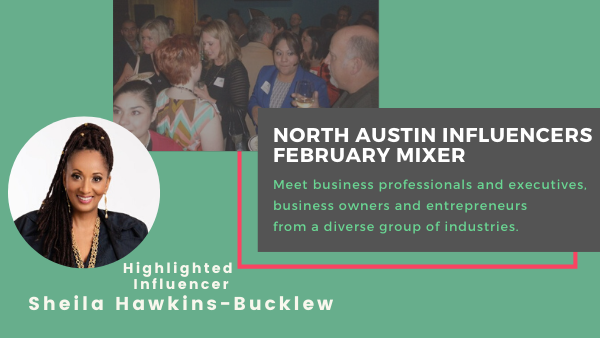 Sheila Hawkins-Bucklew is an entrepreneur whose journey has been woven together with a common thread: the empowerment of women. She is a proponent of equality and women’s rights, something she has held close to her heart throughout her career.

Sheila was born in Pittsburgh, Pennsylvania and earned a B. S. Degree in Business Administration from Duquesne University. Sheila began her professional career in retail buying and store management. She lived in Washington, D.C. before moving to Austin, TX.

Through her servant leadership roles in the Austin community, she began to want to do more, she wanted to impact her global community by empowering women. In 2014 during Austin Fashion Week she launched Hawkins Bucklew™ Handcrafted Jewelry Designs as the face of her mission and the financial arm of the Hawkins Bucklew™ Foundation.

These two Hawkins Bucklew ventures tied perfectly together the common threads of Sheila’s creativity, business expertise, and passion for helping the under served.

In 2017 Sheila was selected by the U.S. Department of State for the Mandela Washington Fellowship Reciprocal Exchange Award. A flagship program of former President Obama, the Reciprocal Exchange program supports American professionals in their travel to Sub-Saharan Africa to engage in collaborative projects that demonstrates a substantial impact on the community and country of an African Fellow. Sheila partnered with Hauwa Liman, a Nigerian Fashion Designer to host their inaugural “Creative Entrepreneurship Bootcamp” in Lagos, Nigeria. This project focused on entrepreneurial programs for women who were creative entrepreneurs.

Sheila remains active in her local community as a member of the Greater Austin Black Chamber, the Four Point’s Task Force in District 6, and Jewelers of America. She is also a former member of The Links, Inc. Town Lake Chapter, National Black MBA Association, National Council of Negro Women, and National Association of Real Estate Brokers (RE-ALTIST). Sheila enjoys volunteering in the community dedicating her time to such organizations as the Capital City Black Film Festival, Austin Area Jazz Festival, and SXSW. Sheila has been featured in articles of the following periodicals: The Austin Chronicle Newspaper, Community Impact Newspaper, Austin Women’s Magazine, Tribeza Magazine, Eclectic Shades Magazine, and British Vogue.

Her most recent awards include the 2018 Profiles of Prominence Award given by the Austin Metroplex Chapter of the National Women of Achievement, Inc., the AFTV5 African Champion Award for 2018 Entrepreneur of the Year, and in September of 2018 Sheila was honored with the African Community Service Award given by the African community in the Washington, D.C. area. Sheila’s personal manta “I Am Because You Are” is what keeps her engaged in the community. Knowing what she has accomplished could not have been possible without the efforts of those who had come before her. Her current mission is to inspire mankind by empowering women through jewelry design. She hopes by sharing her personal story she can positively impact the lives of others.

Sheila, a life-long learner is a 2019 graduate of the University of Pennsylvania in their Executive Program in Social Impact Strategy. This gained knowledge centered around social business enterprises has helped launch Showroom 808; a collaborative marketplace for creative women entrepreneurs.